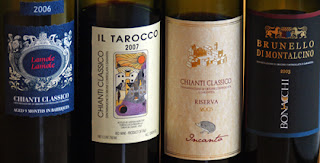 Last night I tasted four red wines from Tuscany--three bottles of Chianti Classico and a Brunello di Montalcino--from Trader Joe's. I tasted the wines blind. They ranged in price from $8.99 to $19.99 (the Brunello). While $19.99 is an excellent price for any decent Brunello these days, I was curious to see whether it really stood out in a blind tasting. Notes follow:

2005 Incanta Chianti Classico Riserva
Medium deep brownish red with good color to the rim. Scents of wood, prunes, nutmeg, and orange rind. Tannic at first, with moderate fruit. Woody mid-palate. Fruit drops away fairly quickly. Finish is a bit tart with fine-grained tannins lingering. Comparatively long with some interesting brandy-like flavors on the end. After opening up a little, the tannins softened, but there wasn't a lot of fruit behind them. Bright, fresh acidity makes this easy to drink, but it doesn't have a lot of depth. Perfectly acceptable everyday wine, but the same can be had for less money. $9.99 at Trader Joe's.

2006 Lamole di Lamole Chianti Classico
Medium deep brownish red. Color a bit less intense than in the first wine. Interesting nose. Wood, nutmeg again and something that put me in mind of women's makeup--stage pancake, perhaps--which is an odd association, but there it is. Noticeably richer on the palate than the first wine. Attractive sweet, ripe fruit. Light tannins. Round. Tasty right off the bat. Well integrated flavors. Not a powerful wine, but immediately appealing with delicate, lingering, woody flavors. Delicate but with a decent balance of fruity sweetness, soft tannins, and acidity. This turned out to be my favorite wine of the four. As it's half the price of the Brunello (which I also liked), I went back for more of this. I don't know if it will improve much with time (I'll reserve at least one bottle for a few years), but tasty for immediate consumption. $9.99 at Trader Joe's. Recommended.

2007 Il Tarocco Chianti Classico
Color again very similar to the first two wines, but somewhat deeper. Had some "off" scents. Smelled of iodine and musty paper. The wine was slightly corked. I took it back for a replacement. The second bottle was fine. Mostly scents of leather with something a bit musky as well. Hints of prunes. Something was suggestive of sour hard candies, but I couldn't quite put my finger on it. Sour plums, maybe? Initial impression on the palate was tartness with some woody flavors. The mid-palate was more attractive, but overall the wine seemed somewhat short and austere with dry, woody flavors predominant. Remained fairly tannic even after quite a bit of time open to the air. Not unpleasant in any way, but not an especially generous wine. Acceptable for everyday drinking, but this was the least attractive of the four wines in my view. It's well worth spending the extra dollar for the Lamole di Lamole wine. $8.99 at Trader Joe's. [Update: This showed much better the following day, suggesting it might be worth tucking away a bottle or two for a few years.]

2003 Bonacchi Brunello di Montalcino
I was excited to find this. Brunello is one of my favorite wines (I have very fond memories of the 1985 Lisini Brunello, among others. Ahh, those were the days...). To get a good Brunello today usually requires spending anywhere from about $45 to $85, so $19.99 looks very attractive (for my local readers, the best selection of Brunello is usually at Traverso's, which has moved from its downtown Santa Rosa location to a new store off Fountaingrove). The wine was tasty, but I wouldn't say it was anything like twice as good as the Lamole di Lamole wine. On taste alone, I'd have chosen this as the best of the group, but in terms of cost performance it was a disappointment even though it's undeniably inexpensive for a Brunello.

The Brunello was very similar in color to the other wines, although a bit deeper in hue and more garnet. Attractive "dark," musky scents laced with prunes, plums, and nutmeg again. At first seems tart and woody, but has a good mid-palate with ripe fruit and an extended, dry, finish marked by attractive, delicate tannins. Has some finesse. Fairly tight. This will need a little more time to be at its best, perhaps. The wine kept evolving over the course of the tasting, however, which is always a good sign. Later it seemed softer, with scents of leather and meat developing. While this is tasty, well made wine, it was not as exciting as I was hoping. Probably fairly priced at $19.99 at Trader Joe's, but, as noted above, the Lamole di Lamole Chianti Classico was nearly as good and half the price.

For many more wine reviews, use the "Wines I'm Drinking" tab on the right.

Posted by Colin Talcroft at 9:57 AM