First blooms of 2010 today on the Digitalis that comes up every year under the hammock. I'm still not sure how this got started. It was probably in some seed I threw around the garden years ago. This is Digitalis purpurea. It always looks pretty in the spring but then suffers through the dry summer. It has been quite reliable nevertheless. 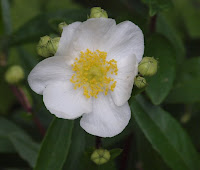 First blooms today also on the Carpenteria californica by the birdbath and on the "New Dawn" climbing rose on the back fence, behind the grape vines. The white bush rose by the Osmanthus also bloomed today. The Carpenteria was a new addition to the garden last year, so I have no record of a bloom in 2009. Actually, there is another Carpenteria in the garden planted a couple years earlier, but it has never bloomed, for some reason. 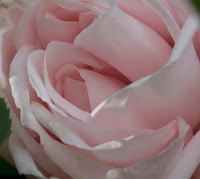 "New Dawn" is a beautiful old-fashioned climber with full pink blossoms that open out of tight buds. I can't remember when I planted it (around 2002, I think), but it is now as tall as the fence (more than six feet high) and about 10 feet wide. It was the closest thing I could find to the pink climber that used to bloom on the fence at what was my grandmother's house in Dayton, Ohio--a rose that long ago became effectively nameless. It had been there forever. "New Dawn" bloomed on April 20 in 2009. A year according to this plant was thus 371 days.

The white bush rose (another nameless rose--although it may be "Tumbling Waters") also had its first flower of 2010 today.
Posted by Colin Talcroft at 9:18 PM