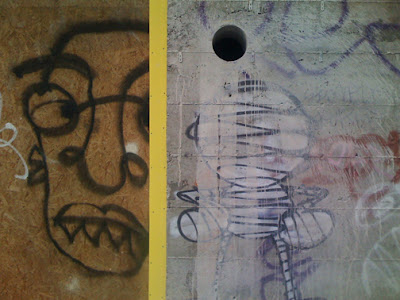 I came across an interesting Reuters article today on Yahoo News. The story, entitled "Cleaners Paint Over Priceless Art," is about street cleaners in Canberra, Australia that painted over "graffiti art" the city wanted to preserve. The Canberra government is now scrambling to protect (with clear coat) other examples of work there by the street artist known as Banksy.

This strikes me as very odd. If property owners encourage graffiti or preserve it, they effectively neuter it. It becomes a travesty. If graffiti artists seek to create work knowing it will be considered a positive addition to an urban landscape and that it will be preserved as art, their work is no longer a rebellious and criminal act--which it seems to me is much of the point of graffiti. The graffiti artist is no longer an outsider. Instead, he or she becomes a participant in a modified version of the traditional relationship between artist and patron. The whole thing seems rather wrong-headed to me. While I understand wanting to preserve an interesting work once it has been created, shouldn't the graffiti artist have to accept that his or her work may be painted over or removed at any time? This reminds me of the original London punk subculture and its Mohawk hairstyles and the Takenokozoku performers in the Harajuku area of Tokyo. What began in each case as a pure expression of the self devolved into a series of hollow stunts for tourists. Perhaps it's just a problem of words: Street artists that use buildings as their canvases with the understanding that their work will be condoned are just that--street artists. It seems to me, however, that they should not be called graffiti artists. What do you think?
Posted by Colin Talcroft at 1:56 PM