New plants blooming in the garden yesterday and today: First blooms yesterday (May 7) on Salvia chamaedryoides, first blooms today (May 8) on the big Ceanothus called "Skylark" and the rhododendron "Goldflimmer."

Salvia chamaedryoides is planted in several places in the garden. The plant hidden behind the fig tree started blooming yesterday. The other examples in the garden look like they won't bloom for another day or two. My records say this plant first bloomed on May 8, in 2009, which would mean a year of 364 days, but I'm not sure which plant I recorded. 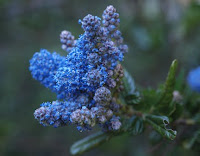 "Skylark" is always the last of the Ceanothus varieties in the garden to bloom. Flowers first opened last year on May 4. A year according to "Skylark" was therefore 368 days. 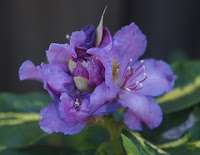 "Goldflimmer" is one of the very few rhododendrons with variegated leaves. The plant has done very well here planted up against a fence that runs north-south, which gives the plant morning sun and afternoon shade. This has been one of the most carefree rhododendrons in the garden. I don't have a record of the first blooms on this plant in 2009.
Posted by Colin Talcroft at 10:02 PM