Wines I'm Drinking: A Jaunt Around the Valleys

I spent much of the weekend escorting friends of friends from Japan around the Napa and Sonoma Valleys. Like the New Yorker who never visits the Empire State Building, I rarely go tasting at the big wineries these days (and especially not at the sometimes snooty Napa wineries). I usually stick to the smaller Sonoma tasting rooms where I buy wine fairly regularly. So, this was reason to go further afield. The vineyards, clothed with new growth, are beautiful right now--in some places like a shag carpet in chartreuse. 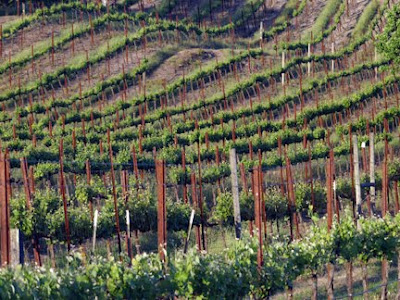 We started Friday with a glass of sparkly on the terrace at Gloria Ferrer, which has one of the best views anywhere in the region. You can see almost the entirety of the Carneros appellation, which spans the southern parts of Napa and Sonoma counties, just north of San Pablo Bay (the roundish projection at the top of San Francisco Bay proper). It was cool with a light breeze but clear and sunny. A perfect way to start the day.

We moved on to Domaine Chandon in Yountville (Napa County) to take the winery tour, which remains interesting, but I can't help feeling cheated by it; I remember when it included views of the disgorging process (during which the settled yeast in the bottles is popped out in a frozen plug of wine) and the bottling line. Now the tour is about half as long as it once was and it costs $12 a head. It used to be free.

Lunch afterwards at Étoile, the restaurant at the winery. Étoile has just received a Michelin star. I was a little disappointed to tell the truth. My vichyssoise was excellent. It was served poured over a layer of goodies such as tiny potato balls, shredded smoked pork, cooked greens, and something that had been marinated in vinegar. Every bite was a surprise. This is what great food should be. However, my main course, duck confit, was tasty, but not extraordinary. Still, it was a very pleasant meal.

Later in the day we went to Opus One and then to Joseph Phelps.  It has been a while since I've tasted Opus One. They are pouring the 2005 and 2006 wines ($30 for a 4oz pour--which sounds like a lot, but that prices a full bottle at about $190, in line with its retail price). I was very surprised at how supple and approachable these wines are already--especially the 2006. I was expecting them to be far tighter and more tannic than they were. I wonder how they will age?

Joseph Phelps has another of the wonderful views in the area. The winery terrace overlooks a shallow valley with a small lake in the distance. A dirt road winds through the valley floor. The near side is planted in Cabernet Sauvignon, the far side with Sauvignon Blanc and Scheurebe, which is used to make dessert wines. A downy woodpecker was going in and out of a nest hole in a tree just a few feet from the terrace. California quail were calling in the distance. The wines were excellent, as always--particularly the current vintages of the Ovation Chardonnay, the Insignia, and the Backus Vineyards Cabernet. 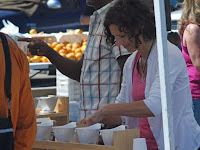 On Saturday, we went to the Santa Rosa farmers' market, starting the day with oysters in butter and garlic and then moved on to Café Citti for lunch--garlicky Caesar's salad and the house ravioli with ground pork and chard stuffing in a light tomato cream sauce, washed down with a bottle of the backyard Cabernet Sauvignon. I've never brought my own wine to Café Citti before, but they were very happy to serve it and charged no corkage. Wonderful.

We tasted at Chateau St. Jean, Enkidu, and Wellington Vineyards. The highlight of the Chateau St. Jean tasting was the Robert Young Vineyard Reserve Chardonnay. Enkidu I had never been to before, but I was impressed by the 2006 Kick Ranch Sonoma Valley Syrah and very interested to find that the grapes come from the Rincon Valley, not more than a few miles from my own house. Wellington is one of my favorite wineries in the Sonoma wine country. The wines are excellent, reasonably priced, and the tasting room people are about the nicest you're likely to encounter anywhere.
Posted by Colin Talcroft at 4:31 PM