I enjoyed the Rouse, a completely unfamiliar piece by an unfamiliar composer. This was quite a sonic romp. The excellent program notes detail the inspiration behind the work--essentially, a musical exploration of what might have happened to the evil dwarf Alberich, whose fate is left unclear at the end of Wagner's Götterdammerung. The composer, quoted in detail in the notes, explains the thinking behind the composition, but music is music. No program and no amount of background information changes the fact that music must stand on its own (as Rouse concedes), and this stands fairly nicely.

Although my grasp of Wagner isn't good enough to have appreciated all the allusions in the orchestral part, I enjoyed the highly inventive music, which is sometimes raucous, sometimes soft and sweet, and frequently surprising--particularly when the soloist, Biggs (pictured above), suddenly starts playing on what looks like a standard rock and roll drum set and the piece suddenly veers into the realm of pop music, momentarily. And why not?

Having said that, the volume of the percussion in some of the earlier sections seemed to overwhelm the accompaniment. There were entire passages during which the strings were effectively inaudible. The music seemed most effective when the two elements were better integrated--when Biggs played softly with his hands (rather than with sticks), when he played the marimba (especially against the backdrop of a haunting oboe solo), or in the later sections of the piece when the orchestra was playing loudly enough to stand up to the percussion. Still, this was fun and the audience was very appreciative. 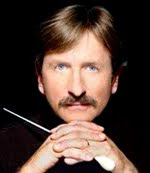 The Beethoven Symphony No. 4 left little impression, I'm afraid. I'm not sure why, but guest conductor Barry Jekowsky (left) took the performers through a brisk, nuanced performance of the Symphony No. 5 that highlighted the dynamics of the piece and showed what the Santa Rosa Symphony is capable of at its best, making it easy to forget the occasional wobbly entrance, the occasional false start, the occasional missed note elsewhere during the concert. Now, if only we could get the audience to stop coughing, talking, unwrapping candies, coughing, hacking, coughing......