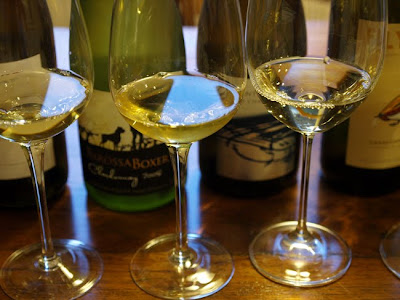 I tasted six inexpensive Chardonnays blind yesterday--the last of the wines from Grocery Outlet I've been tasting ahead of one of that company's twice-annual wine sales (20% off all wines March 30 through April 3). The six wines I tasted were:

2006 Imagine Sonoma County Chardonnay
Pale gold. Quite thin at the rim. Wood scents. Pear blossom. Fairly delicate nose. Nothing really distinctive at first, but later there were strong suggestions of toasty oak. The change on the nose with a little time was fairly dramatic. Rich and buttery tasting. Highly extracted. Has real presence. Acid is pronounced at first, but the tartness falls off fairly quickly and then comes back on a rather long finish also marked by toasty oak scents again and buttery flavors. Solid Chardonnay. Not great wine, but good everyday wine. My favorite of the group of six. Recommended. $6.99 at Grocery Outlet.

2008 Barossa Boxer Barossa Valley Chardonnay (Australia)
Pale gold again and likewise thin at the rim. Very different on the nose, however. Citrus scents. Gooseberries. Very strongly reminiscent of a Sauvignon Blanc. Hints of grapefruit and vegetation. I think any experienced wine drinker tasting this wine blind would call it a Sauvignon Blanc with little hesitation. Moderate to light in body, but good length with a dry finish tinged with a lingering acidity. If you can ignore the fact that this tastes more like a Sauvignon Blanc than a Chardonnay, this is tasty everyday wine. My second-favorite among the six wines. Recommended. $4.99 at Grocery Outlet. Perhaps the best value of the group.

2007 Ventus Patagonia Chardonnay (Argentina)
Fuller, deeper gold with a greenish tinge. Buttery, butterscotch nose. Scents of oil and cereal. Suggested flaxseed or a multigrain flax-rich breakfast cereal. Very unusual scent for a Chardonnay--or any wine. Not unpleasant necessarily, but different. Toasted grain scents. Tasted like toasted grain as well. Otherwise, not very distinctive. A bit flat (lacking in acid) and one dimensional. Short finish. I liked this least among the six wines, but none of these were outright bad. $4.99 a bottle.

2009 Aussie Vineyards "12 Apostles" South Eastern Australia Chardonnay
Palest of the six wines. Nearly colorless. Perfumey nose. Scented soap. Cinnamon. Sandalwood. Incense. Reminded me of a 1970s head shop. Later, melon scents, sappy scents. A hint of asparagus. Sharp attack. Acidic at first, but the acid falls away quickly, leaving a rather flabby impression. Not much length. No distinctive flavors. Not especially unpleasant, but not especially interesting either. $3.99 a bottle.

2005 Fonty's Pool Pemberton Western Australia Chardonnay
Very similar in color to the Ventus wine--a medium gold with a green tinge. Smelled like lemons, lemon cake icing, lemonade, then cereal or grain scents again. Later I began to get suggestions of pimento-stuffed olives and something suggestive of champagne, which usually means yeast and green apples, but the scents weren't quite as easy to pin down as that. Fairly concentrated and powerful on the palate, but not quite as assertive as the Imagine wine. Sweet, grapey, fruity mid-palate. Moderate to good length. Slightly tart finish. Not as good as either the Imagine wine or the Barossa Boxer wine, but probably my third-favorite of the group. I preferred the other two wines, but this is quite acceptable for everyday drinking. $4.99 a bottle.

2009 Fly South Eastern Australia Chardonnay
Pale gold. Thin at the rim. Floral on the nose. Most flowery of the wines. Honeydew melon. Tart, bright first impression, but the tartness falls away quickly. Moderate body. Moderate length. Some canned vegetable flavors on the finish. Not terribly distinctive. Not one of my favorites. $4.99 a bottle.

Conclusions: Looking back at the past week, choosing all white wines and rosés was a gamble on my part. The somewhat older wines Grocery Outlet often buys can be tricky in the case of whites; a little age is more likely to be a good thing in a red--but I knew something good would come of what I picked. There were several wines I liked well enough to recommend: the Bardolino Chiaretto and the Frias Family Vineyard rosés among the pink wines, and the Imagine and the Barossa Boxer wines among the Chardonnays, followed by the Fonty's Pool wine, the Blue Cove rosé, the Yering Station M.V.R. wine from day two, and the Clos du Bois rosé. I hope that gives you enough choices.....

I will announce the winner of the gift card tomorrow.

GIFT CARD GIVEAWAY: I'm giving away a $50 Grocery Outlet gift card this week as part of the promotion. To be eligible to win, all you have to do is comment on one of my Grocery Outlet reviews this week (March 22-26), Tweet about one of the reviews or post a message about one of the reviews on Facebook. The winner will be selected at random from all eligible readers. The winner must agree to blog or tweet about what the card ends up buying at Grocery Outlet. That's all there is to it. Good Luck!

(For more information about the promotion, see my initial post on the subject. See more wine reviews by clicking the "Wines I'm Drinking" label in the bar at right. While you're at it, feel free to explore the rest of my blog. I write frequently and about many topics.)
Posted by Colin Talcroft at 7:29 AM