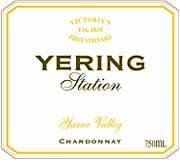 Today I tasted three wines from Yering Station, in Australia's Yarra Valley, purchased at Grocery Outlet ahead of one of that store's twice- annual wine sales (20% off all wines March 30 through April 3). The Yarra Valley, about 30 miles east of Melbourne, in Victoria, mainly grows the big grapes: Pinot Noir, Chardonnay, Cabernet Sauvignon and Shiraz (Syrah), with Viognier grown as well--often with a view to blending with the Shiraz, in imitation of the tradition in the Northern Rhône--, and Rhône varieties are gaining favor generally in the Yarra Valley from what I can tell. I chose two Chardonnays and a Marsanne-Viognier-Rousanne blend to taste. I tasted the three wines together, semi-blind (I knew what wines I'd be drinking, but I did not know which was which before tasting them).

Pale gold. Fairly forward on the nose. Scents of wood, pear blossom, and musk with a hint of something sappy, suggestive of fresh vegetation. This latter scent gained presence over time. Later, there were some nice flinty hints. Later still, I began to notice a rubbery scent--which was not as unpleasant as that may sound--it's a scent I've noticed before in wine, particularly in white wines from Alsace. Medium body on the palate, sweet, moderately long, with a slightly peachy astringency on the finish. Acid not very pronounced. Comes across as a trifle flat, but not at all unpleasant. I suspected this was the blend because of the peach hints (common in Viognier), but, having said that, this did not have a marked Viognier character. Probably past its prime, but enjoyable enough for immediate drinking and it is quite inexpensive. The best of the three wines in my view. I'm not sure I'd buy this again, but it's probably a good value at the sale price, when it will cost only $3.99 a bottle.

Pale gold, but the deepest in color of the three wines. Fairly closed nose. Slightly musky. Hints of oak. A suggestion of honey. Medium body on the palate. Much crisper than the first wine. Moderate length. Some caramel flavors, but not terribly complex and the acidity seemed a trifle forced. Again, probably past its prime, but inexpensive and acceptable for everyday drinking. Preferred the M.V.R., however.

Palest of the three wines, but again a limpid gold. Flowery nose. Musky, perfumey scents--I've known women that smelled like this. Fuller body on the palate than either of the other two wines. Initial impression is one of sweetness. A bit low in acid, which makes it seem a little cloying. Ripe pineapples. Fairly short, and not especially complex, but, with some time, the wine developed suggestions of caramel and honey on the palate and mint on the the nose. Not exciting, but certainly interesting enough to buy at the sale price for everyday drinking. I found the slight minty character intriguing. I've noticed mint in a lot of white wines from Victoria--especially in the dessert wines from makers such as Brown Brothers.

These are some of the wines I'm reviewing this week ahead of the Grocery Outlet sale, looking for underpriced gems. (I'm still looking.) More wines from Grocery Outlet tomorrow.

GIFT CARD GIVEAWAY: I'm giving away a $50 Grocery Outlet gift card this week as part of the promotion. To be eligible to win, all you have to do is comment on one of my Grocery Outlet reviews this week (March 22-26), Tweet about one of the reviews or post a message about one of the reviews on Facebook. The winner will be selected at random from all eligible readers. The winner must agree to blog or tweet about what the card ends up buying at Grocery Outlet. That's all there is to it. Good Luck!

(For more information about the promotion, see my initial post on the subject. See more wine reviews by clicking the "Wines I'm Drinking" label in the bar at right.)
Posted by Colin Talcroft at 7:25 AM