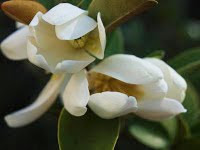 Sunshine and a wave of heat have brought several plants into bloom today--pink creeping phlox, the Bosc pear near the garage, Isopogon formosus, and Michelia yunnanensis (pictured). The Michelia seems finally to have gotten onto its feet, so to speak. The plant looks strong in contrast to the rather wobbly look it had last year. I'm very pleased to have got this beautiful plant going. The cold this year (23 degrees F) didn't bother it at all.  Today it's sporting about 12 small magnolia-like white flowers (the genus Michelia is closely related to the magnolias--or, if you accept recent taxonomic changes, Michelia yunnanensis has another name, and it is a magnolia; for more about this plant, see my post about it from 2009).  I love the contrast between the creamy white petals and the fuzzy cinnamon-colored sepals. The plant bloomed on April 1 in 2009. A year according to this plant was thus 355 days. 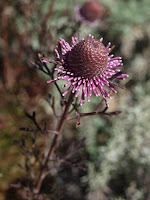 Isopogon is a somewhat bizarre-looking plant native to Australia that I first saw and fell in love with at the Strybing Arboretum, in San Francisco. This plant, too, looks strong and happy this year. Isopogon formosus (pictured left) first bloomed in 2009 on March 26. A year according to this plant was therefore 361 days. The Bosc pear bloomed on the same day last year (March 26) and thus calculated a 361-day year as well. The creeping phlox bloomed much earlier in 2009, on March 5, yielding a long year of 382 days.

I write about many subjects, not just the plants blooming in my garden. Use the tabs at upper right to explore other topics.
Posted by Colin Talcroft at 6:12 PM