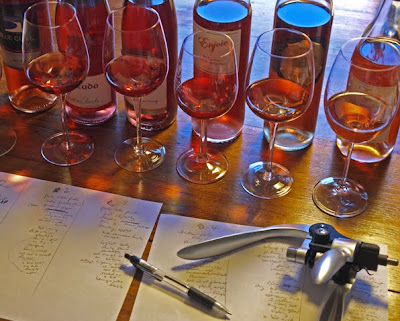 I don't know why some people turn up their nose at rosé. They seem to think only red wine is serious wine, but who ever said wine always has to be serious? In my view, wine always has to be pleasurable, and that's all. And what could be more pleasurable than a beautiful pink wine in a sweating, crisply chilled bottle on a spring or summer day? I love to watch the glasses frost up with condensation when the cold wine is first poured. 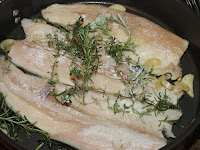 Today I'm posting notes for the first three. Tomorrow I'll post notes for the remaining three. We enjoyed these wines with grilled herb-stuffed trout and herbed mashed potatoes, both made with chives, oregano, parsley, rosemary, and thyme fresh from the garden (left).

A very pretty salmon color (a fairly deep orange-pink). The nose offered dusky strawberry scents and a hint of sulfur that was a bit worrisome at first but blew off quickly. With a little time I got the pleasant scent of linseed oil with the strawberries and a suggestion of cranberries. Medium body on the palate. Sweet but with a good balancing acid bite. Sweeter on the mid-palate. Gives an impression of richness. Quite long and with an interesting hint of tannin on the finish, including a little bitterness that was not at all unattractive. My initial impression of this wine was favorable, although with food, the comparative sweetness made it less attractive than some of the other wines. Perhaps best on its own? Still, this was among my favorites of the evening. Good value. Not especially nuanced, but recommended for everyday drinking if you prefer sweeter styles of rosé or if you're looking mostly for a stand-alone sipping wine. Good value at only $3.99 a bottle. To be clear, this is not a sweet wine, just a bit less dry than some of the others I tasted in this group of rosés.
2007 Julian Chivite, Gran Feudo Rosé (Navarra, Spain, Grenache)
Very pale rose pink. Looks quite thin. Powdered sugar scents. Raspberries. Raspberries and cream. Sweet cake-like scents. Not very distinctive on the palate, though. Fairly short. Crisp, but not a lot of flavor. A bit sour on the finish with tartness lingering on the tip of the tongue. Overall, seemed thin and somewhat sour. Not a favorite, although it began to seem more interesting later, with food. While this is not a bad value at only $2.99 a bottle, there were better wines among the six I tasted. I preferred both the Blue Cove wine and the Clos du Bois wine (below) among the first three. Again, hard to argue with this at only $2.99 a bottle, but not among the better wines of the group of six.
2008 Clos du Bois, Sonoma County Dry Rosé
Pale rose pink again, but slightly deeper in hue than the Julia Chivite wine. The nose was vaguely suggestive of candy apples, but generally fairly closed. Light in body on the palate. Moderate length. Sweetish but with adequate balancing acidity. The lingering impression is one of simple ripe fruit. Sweetness made the wine seem a bit heavy on the finish, but later and with food, this seemed more focused and interesting. Not a favorite, but quite acceptable for everyday drinking. Fairly priced at $3.99 a bottle.
More wines from Grocery Outlet tomorrow--specifically, the other three rosés. Of those I tasted today, the Blue Cove wine was best, but my favorites of the six rosés were both among the second group (see tomorrow's notes).

GIFT CARD GIVEAWAY: I'm giving away a $50 Grocery Outlet gift card this week as part of the promotion. To be eligible to win, all you have to do is comment on one of my Grocery Outlet reviews this week (March 22-26), Tweet about one of the reviews or post a message about one of the reviews on Facebook. The winner will be selected at random from all eligible readers. The winner must agree to blog or tweet about what the card ends up buying at Grocery Outlet. That's all there is to it. Good Luck!
(For more information about the promotion, see my initial post on the subject. See more wine reviews by clicking the "Wines I'm Drinking" label in the bar at right. While you're at it, feel free to explore the rest of my blog. I write about many topics.)
Posted by Colin Talcroft at 7:46 AM