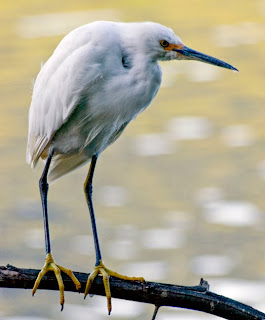 In a lull between bouts of work today (April 8)--in need of a change of pace, and mindful of predictions of yet more rain in the coming days--I spent a couple of hours at Lake Ralphine and Spring Lake, just a few minutes from my house. I had to go late in the day--not the best time of day to see birds--and there was comparatively little activity. A fair number of birds were singing, but I saw very few of them--which is always frustrating. Having said that, I did see the following at Lake Ralphine: Common merganser, pied-billed grebe, crow, Canada goose, red-winged blackbird, bufflehead, double-crested cormorant, Brewer's blackbird, common goldeneye, turkey vulture, and the spotted sandpiper that's been hanging out on the east side of the lake for a couple of months now. 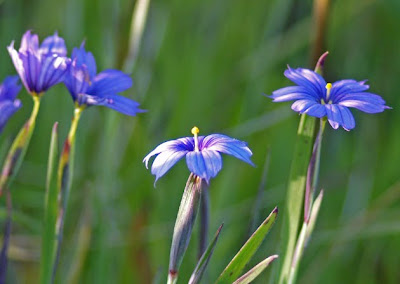 The highlights were the spotted sandpiper, the green herons, the snowy egret (which let me approach very close), and a very large drift of Sisyrinchium in full bloom on the shaded side of one of the saddle dams at Spring Lake.

I was also able to record an unfamiliar bird song with my iPhone (amazing little contraption) that was clearly enough captured to later identify the bird as a Black-headed Grosbeak.

For more information about bird watching in Sonoma County, see my Website Sonoma County Birding Spots
Posted by Colin Talcroft at 12:05 AM