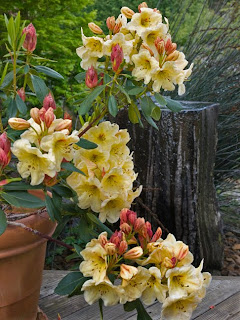 After another night of torrential rain (we got a full inch of precipitation), the sky is blue, the sun is out, and the garden is awash with new color. First blooms of 2010 today on some of the monkey flower plants (Mimulus sp.)--I've given up trying to remember which is which--on the small, violet Pacific iris (Iris douglasiana), and the first of the German or bearded iris (the variety called "Change of Pace" that always seems to bloom first). Salvia sonomensis (Sonoma sage) is also blooming today. Yesterday the red and yellow rose "Cocktail" had its first flowers of the year. The Cytisus scoparius called "Moonglow" is now in full bloom, along with the Australian native Isopogon Formosus, and the Rhododendron "Double Eagle," which is pictured here (top photo). In 2009, the first bearded iris bloomed on April 6. Thus, a year according to the irises in the yard was 364 days. "Cocktail" was early this year; in 2009 it first bloomed on April 20. "Change of Pace" bloomed on April 10 in 2009, for a year of 360 days. Scabiosa bloomed yesterday for the first time this year--very late compared with March 15 in 2009, for a year of 386 days. 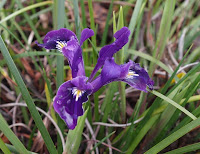 I particularly like the Pacific iris. It blooms in large colonies on the hillsides in the area. Growers have bred fancier varieties with more frills and a wider range of colors, but this is the unaltered form, and it's quite good enough for me. I wonder if you've ever driven back to Sebastopol or Santa Rosa from the coast near Bodega Bay by way of Coleman Valley Road? There are large patches of this iris on the high bluffs there that look out over the Pacific Ocean. It's a winding, single-lane road for much of the way. It's often windy. In the late afternoon or just before or after a storm, the views can be spectacular. Heading east, it drops you into the town of Occidental. A road well worth exploring next time you're in the area. I wish I could show you.
Posted by Colin Talcroft at 12:55 PM