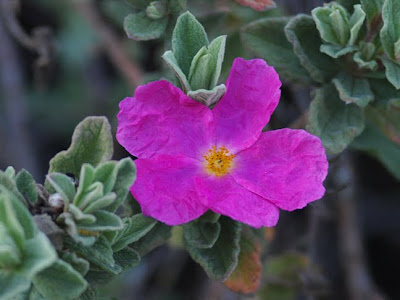 At this time of year, keeping up with the garden begins to get difficult. Every day brings new flowers. Today the first blooms of 2010 came on the rock rose (Cistus) called "Sunset," on two roses--"Nearly Wild" and "Easy Livin," on Echium vulgare, and on one plant that I can't identify any more. "Sunset" is pictured above, Echium vulgare below. 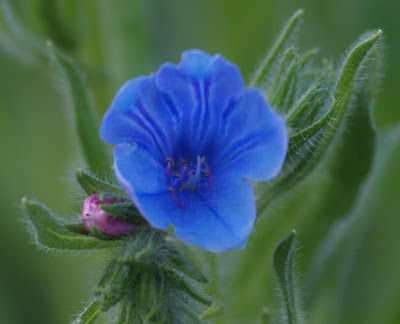 Echiums are generally very tall plants with spikes of tiny flowers sometimes as much as 20 feet high. They are native to places like the island of Madeira. You've probably seen them on the coast if you live in California or visit here--at places like Bodega Bay and Mendocino. They have common names like "Tower of Jewels."

Vulgare is the smallest and least showy of the Echiums I know, but it's pretty nevertheless. The flowers bloom in loose spikes (the photo here shows only a single small blossom). They start out clear blue and fade to a washed-out violet pink. The plant is only about 18 inches tall. It's strong (tolerating neglect), but it tends to look a bit ratty late in the season. Still, it's a nice addition to the spring color parade.

Like many of the Echiums, it will reseed itself if you let the flowers go. There are about 8 Echium boissieri plants around the garden this year--none of which I planted. The original, single plant was put in about four years ago. It's long gone, but its descendants continue to thrive. The Echium vulgare is a volunteer, too, from a single plant I put in several years ago. Two or three Echium wildpretii are set to bloom this year as well. A few of the Echiums are perennials. Most are biennials (producing a rosette of low leaves the first year, a tall flower spike the second year and then dying). Echium vulgare is an annual.
Posted by Colin Talcroft at 11:10 PM