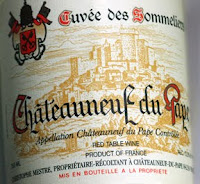 I enjoyed this wine at a family birthday celebration we did recently at the Fig Café, in Glen Ellen--sister restaurant to The Girl and the Fig, in Sonoma. I like the Fig Café because it's one of the very few restaurants in the area that doesn't charge a high corkage fee. In fact, the Fig Café will happily uncork and serve wines you bring in yourself for nothing. Yes, I know it's hard to believe that right in the middle of one of the world's great wine-growing regions, you'd find a restaurant that was friendly to wine lovers, but it's true. (I don't know if The Girl and the Fig has the same policy; I've been there only for lunch.)

I moved to Santa Rosa in the autumn of 2000, exhausted from years of living in Tokyo and from the pressures of twelve years in the financial industry there, including six years as a securities analyst during Japan's economic bubble period (which admittedly had its perks, but I was exhausted nevertheless). Everything was new here in California. I think I was in a state of shock for a while after coming "home"--although nowhere really feels like home to me, the consequence of never having lived any one place for very long. If anywhere is home, I suppose Tokyo is, but, at that time, I was dazed and continually surprised by all the space, by all the sunshine, and by the bounty in the supermarkets in the US. What is now Whole Foods was a store called Food for Thought. It had an interesting wine section and an interesting wine buyer that I became friendly with. This is a wine I bought shortly after landing back here in the US. The bottle still has the price sticker on it. I paid $21.99 for it.

It was in beautiful condition when we drank it at the gathering, probably at its peak. It had spent its final ten years in my cellar. More than anything, I enjoyed it for its heady bouquet of violets. I'm a sucker for the scent and taste of violets in a wine. I suppose that's why so many of my favorite French reds come from the southern Rhône. This one was full of violets. Delicious. Another very good yet inexpensive 1998 wine from the southern Rhône.

For a long time, references to "violets" in wine perplexed me. The violets I knew never had much scent (they were an aggressive spreader in the Dayton, Ohio garden I took care of for my mother as a teenager. Pretty, but not especially fragrant. I spent a lot of time ripping them out of places they didn't belong.) It wasn't until I encountered Viola odorata, the violet the French like to entomb in sugar crystals, that I understood. Find this plant at a nursery and plant it in your garden (steal and eat one of the flowers at least). Everything will make sense.

Familiar, as I say. The first time I smelled and tasted one of these flowers I found myself suddenly standing in the New York City of my childhood. Brooklyn, to be exact. St. John's Place. On the sidewalk in front of our apartment building, unrolling a roll of candies. No violets grew at St. John's Place. Very little grew there. I mostly remember asphalt and concrete and yellow bricks. But there was a candy store at the corner of our street--the store that my brother and I were sent to on Sunday mornings to bring back the New York Times from, the candy store where occasionally I was allowed to use my allowance to buy some candy (I think I was given 10¢ a week). [Looking at Google Maps, I see that this candy store must have been at the corner of St. John's Place and Underhill Ave. Our address on St. John's Place was 283.]

I remember my favorite candies. LifeSavers above all else. I remember the sense of outrage I felt when they went from 5¢ a roll to 7¢ a roll--seven seemed such an untidy number--not to mention that my allowance suddenly bought only one roll. My favorite flavor was "Tropical." Mangoes? Coconuts? Pineapples? I don't remember exactly, but they were wonderful. I used to dissolve them slowly in my mouth, trying to see how small and thin I could let the round candy become before it broke in two. Another favorite was a candy I've been unable to remember the name of. It came in small rolls--about half the size of a LifeSavers roll (both in length and diameter). Each candy was round and slightly cupped. One fit into the next like a nestled spoon. They came in pastel colors. One of the flavors in the multi-colored roll (I realized after I encountered Viola odorata)  was redolent of violets. Perhaps that childhood association is part of the reason I respond to the scent of violets so instinctively, so powerfully, so pleasurably.
Posted by Colin Talcroft at 9:11 PM