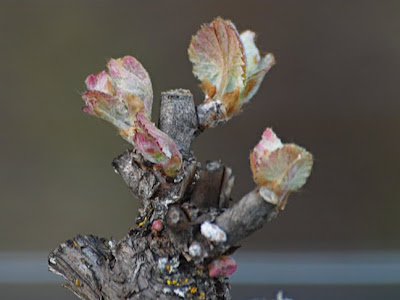 The first leaves are beginning to appear on the Cabernet vines in the back yard. The buds actually broke a few days ago, but leaves are now pushing out. As usual, they are about two weeks behind the Sangiovese vines.

Four of the original vines we planted failed to survive the first year. The nursery that supplied them, Nova Vine (right across the street from the main entrance to Oakmont, on Highway 12, in Santa Rosa), replaced them for me but accidentally gave me Cabernet Franc instead of Cabernet Sauvignon. I decided to keep them, so the Cabernet wine each year is a blend of these two grapes--17% Cabernet Franc, 83% Cabernet Sauvignon (on the assumption that all vines yield equally.
Posted by Colin Talcroft at 11:24 PM