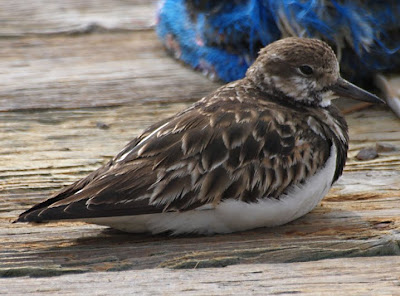 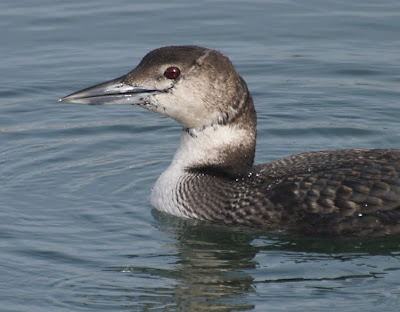 Did a little birding today. At the Bodega farm pond (about a mile east of the town of Bodega) I saw mostly canvasbacks (about 12) along with buffleheads, mallards, Canada geese, and turkey vultures overhead.

At Smith Bros. Rd., behind the Inn there, saw about 35 snowy egrets on the mud flats along with two great egrets. There were about 200 marbled godwits and about 30 willets. On the water there were buffleheads, a few greater scaup, Western grebes, about 300 brants, ruddy ducks, a few double-crested cormorants, Western gulls, a pied-billed grebe or two, one horned grebe, and a couple of female mergansers that looked like common mergansers but may have been red-breasted--they were quite far out.

At Campbell Cove, saw sanderlings, common loons, Western gulls, scrub jays, and a black phoebe. So, nothing startling, but there were certainly many, many brants, more loons than I'm used to seeing (probably saw about 12 different birds during the day), and many more grebes than usual. In at least two locations (Porto Bodega and the north end of the Harbor) there were groups of 10-30 birds, mostly eared grebes, with a few horned grebes thrown in--an excellent opportunity to compare the two in their confusing (to me, anyway) winter plumage.

The ruddy turnstone (pictured above) sat quite contently nearby on the pier at Porto Bodega. One of the loons also let me get close. Something is odd about the markings on his head. I wonder if this bird is the one I saw in about the same area during the summer struggling to get disentangled from a loop of fishing line?
Posted by Colin Talcroft at 6:06 PM