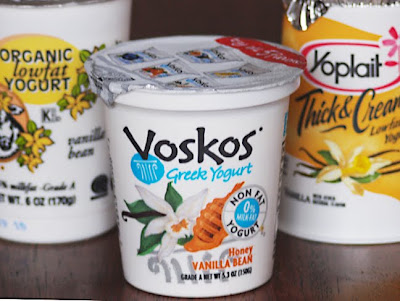 I tasted four more vanilla yogurts today. If you want to know what prompted all this yogurt tasting, see the Introduction.

($1.29 for a 5.3 oz. container, or $0.24 an ounce, 0% milkfat, 17 grams sugars, 45mg sodium)
Pale in color with a slightly runny appearance, but quite thick and creamy when stirred up. Nothing to stir up from the bottom. Vanilla specs throughout. Good vanilla scent, but also a sour yogurt scent. Good texture. Not tart but has a noticeable yogurt tang. Comes across as neither sweet nor sour. Moderate vanilla flavor. A compromise between the sweet and sour schools of yogurt making. Sweetened with cane sugar. Comparatively expensive, but among the better yogurts in the tasting, in my view.
Trader Joe's Organic Lowfat Vanilla Yogurt
($0.99 for a 6 oz. container, or $0.17 an ounce, 1.5% milkfat, 22 grams sugars, 75mg sodium)
Pale in color, but rich with vanilla specs. Not especially runny or thick--somewhere in the middle. Rather distant vanilla scent. Hints of yogurt sourness, but not very heavily scented, which doesn't prepare you for the rather full and decadent flavor. Sweet, creamy, rich. Strong vanilla flavor. This is on the sweet side, which usually isn't my preference, but I liked it. At 22 grams of sugar (cane sugar) this had less sugar than some of the yogurts I tasted (as much as 33 grams) but for some reason it tasted sweeter than some of the others. It may have something to do with the sodium levels, which, unfortunately, I didn't pay attention to in the first batch I compared. Sodium has ranged from 45mg to 110mg in the yogurts I have checked, putting this one in the middle of that range. While The Trader Joe's Organic Low-fat Vanilla lacks any discernible yogurt tartness, it was the tastiest of the sweeter examples. At $0.99 for a 6 oz. container, it is also in the middle of the range price-wise (the range of prices has been $0.40 to $2.39 for a 5-6 oz. container).
Clover Organic Vanilla Bean Lowfat Yogurt
($1.18 for a 6 oz. container, or $0.18 an ounce, 1.5% milkfat, 16 grams sugars, 110mg sodium)
Solid rather than liquid. Pale, with no flecks of vanilla. Scents of both vanilla and yogurt. Thick, slightly cheesy graininess, but nice creamy texture when well stirred. Much less sweet than the others in this group, but not a lot of yogurt tang either and comparatively little vanilla flavor. Somehow this is tasty but doesn't have any especially notable characteristics. Good solid yogurt, but not a standout. Sweetened with cane sugar.
Weight Watcher's Nonfat Vanilla Yogurt
($0.89 for a 6 oz. container, or $0.15 an ounce, 0% milkfat, 12 grams sugars, 110mg sodium)
This is the only yogurt I left unfinished. It had an odd and persistent saccharine-like aftertaste, although there are no artificial sweeteners in this. It is sweetened with crystalline fructose and inulin. Inulins, I see, are a group of polysaccharides that occur naturally in many plants. The inulin may have been the source of the taste. Otherwise, the WW yogurt was very pale and slightly gelatinous with nothing to stir up from the bottom. There was a pronounced vanilla scent. It was medium-thick when stirred. Very strongly flavored--giving a strong impression of sweetness, despite only 12 grams of sugar, but I suspect the inulin isn't included in that number. Any yogurt flavors there may have been were effectively masked by the sweetness.