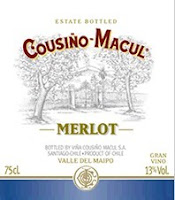 I recently reviewed the 2005 Maipo Valley (Chile) Merlot from Cousiño-Macul in these pages, having picked up half a dozen bottles at our local Grocery Outlet. It was such a good value that I went back to buy a case yesterday but was disappointed to find the 2005 gone. I must have bought all there was. The store now has only the 2007. I bought a case anyway, assuming that it was unlikely to be overpriced at $2.99 a bottle, even if it was less interesting than the 2005.

I was right on both counts: It is a less interesting wine, but it's still a bargain.

The 2007 was noticeably thinner and less tinged with orange. It looked like the younger wine that it is. It had some of the herbaceousness of the 2005, but nothing like the pronounced sage scent of its older sibling. The nose was more floral, suggestive of pencil shavings, and altogether more distant. On the palate, the wine was light in body with delicate fruit sweetness and very light tannins. The general impression it gave was one of smoothness but it had no especially endearing characteristics. The mid-palate was a trifle weak, but the wine had fairly good length, with distant, lingering, slightly woody tannins on the finish. With time some cocoa hints developed. No rough edges. This wine is perfectly acceptable for everyday drinking, but it lacks the distinctive characteristics and depth of the 2005. Its somewhat austere, rather European flavor profile may not appeal to wine drinkers used to the up-front fruitiness of California wines. Still, this is a good value at $2.99 and I don't regret buying a case of it. If, however, your Grocery Outlet has the 2005, snap it up.
Posted by Colin Talcroft at 10:49 PM