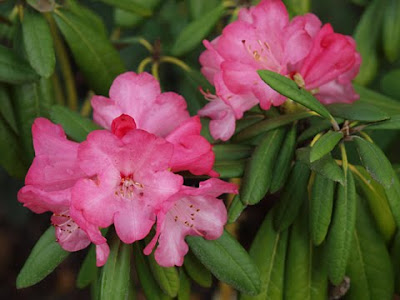 Our first rhododendron began to bloom today, the bright red one called "Noyo Dream," planted under the bird feeder (it fades to pink). Last year this plant bloomed on February 25--so the flowers opening today seems very early indeed. A year as calculated by this plant was thus only 347 days--the first real deviation from around 365 days of any of the plants I've been tracking. Perhaps it has bloomed early because of all the rain we've had this--or maybe it bloomed late last year, retarded by the drought. 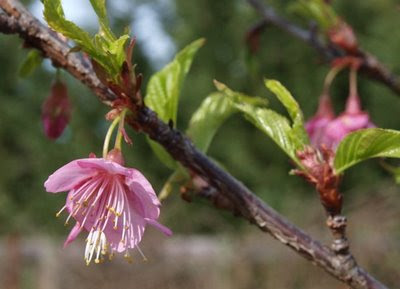 The Japanese Higanzakura (a flowering cherry) appears to have started to bloom on the 5th. That, too is considerably earlier than last year. The plant bloomed in 2009 on February 20; a year according to this plant was therefore 350 days. Both photos are of the plants last year. None of the blossoms are so fully open yet.
Posted by Colin Talcroft at 10:38 AM