Books I'm Reading: Black: The History of a Color 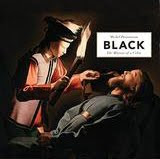 I've just finished reading Black: The History of a Color, by Michel Pastoureau (Princeton University Press, 2009), an English translation of a book published in French in 2008. I've had some experience reading French art criticism. It's sometimes been more mystifying than enlightening. Bad translation may have had something to do with it. I suspect, however, that a misguided, egotistical desire to appear erudite on the part of authors is mostly the root cause of problems I've had with French art historical writing in the past. Happily, this book appears to have been translated well--it reads quite naturally as English with one or two very minor exceptions--and it has something worthwhile to say in a style that is informative rather than aimed mostly at enhancing the reputation of the writer among his academic peers.

The book looks at the use and meanings of the color black throughout history from the perspective of religious art, heraldry, later secular art, and textiles and fashion--mostly in the Western world--, beginning with use of black at sites such as Lascaux, and then moving on to its use in ancient Greece, Rome, and Egypt, in the Middle Ages, the Renaissance, the Enlightenment, and in the modern era. Frequently the discussion dwells on whether black was considered a color at all and what its connotations were in different periods of history. The author pays particular attention to questions of whether black had negative associations in different historical contexts. There is much valuable information about the history of dyeing in different periods and the fashionability of the color black among the nobility and upper classes (and later the wealthy merchant class) of Europe.

Sections on the influence of Newton's Principia Mathematica, which effectively divorced both black and white from the class of colors, were useful, and I was pleased to see this author discuss the effect printing must have had on the human consciousness of color (at least in the West) as black and white illustrations became relatively widely available to the public and replaced the costly and scarce hand-colored illustrations that were the norm in earlier periods. It has always struck me that after the diffusion of moveable-type printing processes and before full-color printing, television, and the Internet, most people experienced art not immediately viewable in their vicinity in the form of black and white engravings, etchings, or woodcuts--which had to have had an impact on perceptions. I've long wondered whether Van Gogh's use of sharp, short, repeated strokes in his drawings (and to a lesser extent in the paintings) might not have been influenced by his exposure to engraved reproductions. This book does not address or answer that particular question, but it at least acknowledges that black and white reproductions and illustrations became pervasive and probably profoundly changed the way people thought about color, even if unconsciously.

Nicely printed and attractively illustrated throughout. While I wouldn't call this an easy read, it's likely to appeal to anyone with more than a casual interest in the history of art--the history of colors, in particular. Recommended.

I should also say that I love the painting on the cover. At first I took it to be a Georges de La Tour for the obvious reason--its excellent handling of a night scene lit dramatically by fire or candlelight--, but it turns out to be a painting by Etienne La Tour, son of Georges, a painter I was unaware of. You learn something new every day, as they say. It is The Discovery of the Body of Saint Alexis in the National Gallery of Ireland. It strikes me as wonderful, however, less for the lighting effect than for the expression on the torch bearer's face--its combination of no-nonsense determination and the slightly awestruck. Beautiful.

Having said that, it was chosen, no doubt, for the black clothing of Saint Alexis and its deep black background. Doing a little Internet browsing, I see that many sites attribute this painting to Georges de La Tour. I'll have to look into this and see who is right. The book reviewed here attributes it to Etienne de La Tour. I've sent an enquiry to the gallery. They should know.

Two other things about the painting puzzle me. Is that a young man or a young woman holding the torch? Have I just revealed my deep ignorance of stories about St. Alexis? Most certainly. And what is she doing with that piece of kelp? Hmmm....further research appears to be in order.

[Update: I got a reply from the National Gallery of Ireland. Apparently the painting was originally attributed to Georges de La Tour when it entered the collection in 1968. That attribution was disputed. Subsequently (by the early 1980s) it was attributed to Etienne La Tour but is now described as being "of the school of Georges de La Tour"--in other words, it is not considered to be by either. It is an attractive canvas nevertheless.]

[Further update: I got another reply. The gallery has corrected its earlier comment and said that it appears the official attribution at the moment is, in fact, Etienne La Tour. I'll let you know if that changes.]
Posted by Colin Talcroft at 7:55 PM