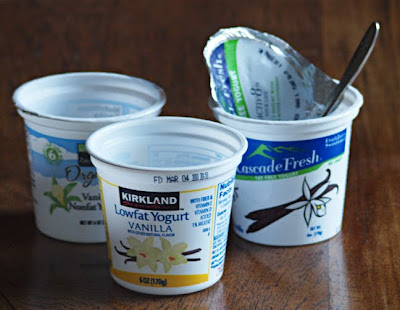 ($0.85 for a 6 oz. container, or $0.14 an ounce, 0% milkfat, 16 grams sugars, 90mg sodium)
Pale, creamy white. Quite solid. Stays put in the cup. Strong vanilla scent. Nice creamy texture when well stirred. Good texture in the mouth, too. No vanilla bits and nothing to stir up from the bottom. Creamy, but not too thick or sticky. Moderate vanilla flavor. Moderate yogurt tang and not excessively sweet. Good balance. A nice, middle-of-the-road yogurt. Not exciting, but solid. Tastes like yogurt and has no objectionable characteristics. I liked this one more than many. Has more active cultures than any of the other yogurts I've compared (eight rather than the usual four to six). All natural ingredients. Sweetened with fruit juices.

Slightly yellowish in color, but there are no colorants listed on the label. Shiny, gelatinous look that put me off immediately. Doesn't mix well. remains in chunks, kind of like stirring Jell-O. No scent of yogurt. Hints of vanilla. No vanilla specks. Nothing to mix up from the bottom. Very thick, sticky texture. Strongly flavored, but tastes mostly of sugar. Had an unpleasant way of sticking to the roof of my mouth. Really doesn't taste like yogurt at all. Sweetened with sugar and corn syrup. Did not care for this.
Chobani Nonfat Vanilla Greek Yogurt
($1.49 for a 6 oz. container, or $0.25 an ounce, 0% milkfat, 13 grams sugars, 65mg sodium)
Very pale white. Quite thick. Solid in the cup. No vanilla specks. Nothing to mix up from the bottom. Good yogurt scent. Thick, slightly cheesy texture, but quite smooth when well stirred. Nice texture in the mouth. Creamy. Good vanilla flavor and a good yogurty tang. Nice balance of sweetness (just noticeable) and tangy flavors. Sweetened with sugar. Delicious. This is close to my idea of what yogurt should be--thick and creamy, but smooth (and not sticky or gelatinous), distinctly tangy (but not sour) and not with so much sugar that the yogurt flavor is overwhelmed.
Kirkland* Lowfat Vanilla Yogurt
($0.53 for a 6 oz. container, or $0.09 an ounce, 1% milkfat, 24 grams sugars, 95mg sodium)
Pale, gelatinous look. Slightly runny. No vanilla specks. Nothing to mix up from the bottom. Moderate yogurt scent. The vanilla was more noticeable than yogurt. Tasted very sweet. It immediately reminded me of the frosting on cheap, horrible birthday cake. Very artificial flavor. Slight tang on the finish, but tasted more like an acid addition than like the sourness of yogurt. Looking at the label, this has lime juice added, and I realize now that that is what I was tasting. Thumbs down. One of only two I was unable to finish eating; this was actually unpleasant. Sweetened with sugar and inulin. For more on inulin, see notes to the Weight Watcher's brand yogurt in Part III of this exercise. It's probably no coincidence that that was the other inulin-sweetened yogurt and the other one I was unable to finish. This has the advantage of being inexpensive, but I thought the comparably priced Safeway brand product much better if price is the main consideration.
* Kirkland is the Costco house brand. Manufactured by Dannon. I'm assuming this is identical to the Dannon product. I wonder who makes the Safeway yogurt?
Whole Foods Organic Nonfat Vanilla Yogurt
($0.99 for a 6 oz. container, or $0.17 an ounce, 0% milkfat, 28 grams sugars, 110mg sodium)
Slightly creamy color. Solid in the cup, but a bit watery on top. Smells like yogurt but not much like vanilla. Slightly chunky texture, but quite smooth when stirred up. No vanilla specks, nothing to stir up from the bottom. Not much vanilla flavor. Overall impression is one of tartness--but not a yogurt-like tang. Rather bland actually, except for the tartness, which suggested a cheap white wine that's been balanced after the fact with acid additions. I wasn't surprised to find citric acid among the ingredients. That's what it mostly tastes like. Sweetened with evaporated cane juice. Would have expected better from Whole Foods.


Trader Joe's Organic Greek Style Nonfat Vanilla Yogurt
($1.69 for a 5.3oz. container, or $0.32 an ounce, 0% milkfat, 17 grams sugars, 45mg sodium)
Creamy off-white color. Full of vanilla specks. This yogurt looks delicious. Good vanilla scent, but not much scent of yogurt. Thick, rustic texture at first. Creamy when stirred well. Nothing to stir up from the bottom. Thick, creamy flavor. Moderate sweetness. Just enough, but doesn't have much in the way of a yogurt tang either. Excellent texture, but a bit disappointing taste-wise. Not bad, but not especially exciting either. Sweetened with cane juice. Contains citric acid, but doesn't have the exaggerated sour taste that some have had when citric acid has been an ingredient.

Quite runny-looking, with liquid on top. Pale, creamy white. Very creamy and smooth when stirred. No vanilla flecks, nothing to stir up from the bottom. Not a lot of scent--of vanilla or of yogurt--, but has a good yogurt flavor. Neither sweet nor especially tart. Great texture again, but not a lot of vanilla flavor. Sweetened with evaporated cane juice.

Beautiful fresh cream color. Fairly liquid appearance, but moderately thick when well stirred. Very nice vanilla scent. WOW! Sweet. Too sweet for my taste, really, but amazing flavor. Decadently creamy and rich tasting. Easily the most delicious of all the sweeter yogurts, yet this one managed to achieve a noticeable yogurt tartness at the same time. Outstanding. Absolutely delicious. Very sweet (sweetened with sugar), but somehow I didn't mind in this case. Will definitely buy this one again! [But see notes below--this was NOT a low-fat or non-fat yogurt.]


Conclusions
What is good yogurt? It seems to depend on whether you like your yogurt to taste like yogurt or sugar. While some of the sweeter yogurts among the 18 yogurts I've tasted so far were quite appealing (notably the Trader Joe's Organic Vanilla and (Wow!) the Liberté Méditeranée French Vanilla**), I prefer yogurt to taste like yogurt--that is, I like it to have a sour yogurt tang. The Icelandic Skyr, at the other end of the spectrum, was a bit over the top--rather too tart for my taste--but still, it was among the most interesting examples simply because it had some character. My favorites among the less sweet yogurts were the Stonyfield "Oiskos" Organic Greek Vanilla Yogurt and the Chobani Vanilla Greek Yogurt. The least interesting yogurts were thin and runny, although bulked up with gelatin, and they tasted mostly like corn syrup (the sweetness overwhelming the yogurt flavor), or they had other artificial-tasting flavors. I was surprised to find that the yogurts I liked least were those made by Yoplait and Dannon (the Kirkland yogurt)--both of which used to be decent brands. I found both really unpleasant, especially the Dannon product. My dislike of these two may be related to the presence in them of inulin as a sweetener.

I hope this taste test will be of use to someone out there. If nothing else, my digestion is back in tip-top shape. One thing bothers me, though. This is Sonoma County. Where are all the handmade artisan yogurts? They must be out there. I guess I go to the wrong grocery stores. Farmer's market maybe?

[**This yogurt is wonderfully delicious, but I was mistaken about the milkfat content. This is not a lowfat yogurt, so should not properly be compared with the other yogurts in the tasting. I was trying to figure out how they packed so much richness into a lowfat product. It turns out they didn't. This one is made with whole milk AND cream. Still--it's delicious.]
Posted by Colin Talcroft at 2:47 PM