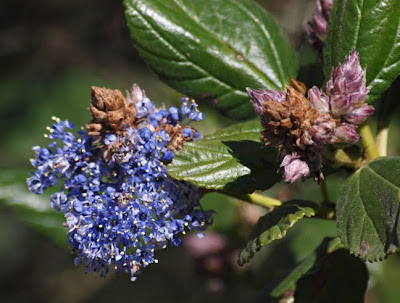 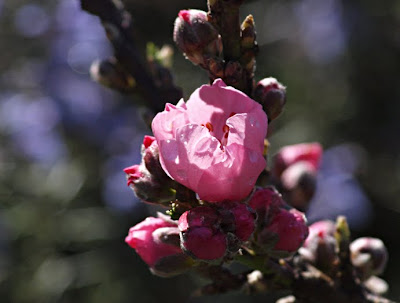 The warmth and sun today has coaxed out new flowers in the garden. The "Ray Hartman" Ceanothus (or California lilac, top photo) and the dwarf peach (bottom photo) have both started blooming today. The Ray Hartman is now a small tree. It looks fabulous when at its peak, which should come within about two weeks. The dwarf peach has grown very slowly--left behind by a dwarf nectarine planted on the same day. Small differences in location (the trees are only a few feet apart) can make such a big difference; the peach gets an hour or so more shade both in the morning and afternoon. The fruit of the two trees is delicious. The deep pink blossoms contrast nicely with the rosemary always in bloom at the same time.

Yesterday brought the first flowers of 2010 on the little Santa Rosa plum tree and on the two-toned daffodils that went in last year.

I missed the first blooms on the Ceanothus in 2009, but I seem to have noted on March 19 last year that they had been open for about a week, suggesting the tree bloomed around March 12. That would make the flowering quite early this year. The dwarf peach started blooming on March 2 in 2009, which means a year according to the peach was 357 days. The Santa Rosa plum bloomed on February 23, 2009, so a year according to that plant was 363 days. I don't seem to have a 2009 record of the first blossoms on the pretty white and coral daffodils that opened yesterday.

I write about many subjects, not just the plants blooming in my garden. Use the tabs at upper right to explore other topics.
Posted by Colin Talcroft at 12:59 PM