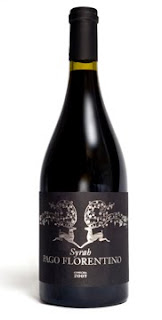 A small triumph of modern winemaking. I recently tasted the 2007 Pago Florentino Syrah, made from grapes grown in Castilla-La Mancha, the southern half of Spain's great central plain, and part of the old Spanish kingdom of Castile (Castilla). With its vineyards mostly at high elevations (1,600-2,300 feet), La Mancha is brutally hot in the summer and cold in the winter. Traditionally, the area has made large quantities of ordinary wine sold mostly in bulk (although I have had excellent wines from Valdepeñas, one of the Denominación de Origen areas within La Mancha). Castilla-La Mancha makes something like half of Spain's wine. The most heavily planted grapes are Airén (far and away the most common) and Cencibel (the local name for Tempranillo), along with Garnacha (Grenache) and Monastrell. Airén is a white grape about which no one ever has anything good to say. It's main distinction is that it has long been the world's most planted variety in terms of acres under the vine--and entirely because so much is planted in La Mancha in vineyards with widely spaced rows. Because of Spain's connections with the New World, the ageworthy reds of that country have traditionally been aged in American oak. All of this information is a prelude to the following observation: The 2007 Pago Florentino Syrah is a non-conformist--thoroughly modern in its philosophy.

The wine is made from Syrah--widely planted around the world, but truly great in only a few places and not generally in Spain. It reaches its greatest heights in the northern Rhône valley in France (think Hermitage, Côte-Rôtie--two of my favorite wines) and in Penfold's Grange, from Australia--that's the conventional wisdom, anyway. So, the grape is "wrong," and, according to the label, the wine is aged for 30 months in French oak rather than American oak.

I'm generally not a fan of Syrah. Too often it's all fruit, with no other dimensions, especially in California and most of Australia (although I admit to relative ignorance here; because I generally don't like Syrah, I usually don't drink it). In extreme cases it can taste like grape Kool-Aid spiked with rather too much alcohol. So, buying a case of this wine on spec was out of character for me. I have to confess that I was convinced entirely by the advertising of the retailer--PJ Wine, in New York (212 567-5500)--which is also out of character. I've been on their e-mail list for about five years now, maybe longer (where has the time gone?). Have you ever made a single purchase from a catalog and then had the catalog follow you around for the rest of your life? That's what happened to me here. Years ago I bought a case of my favorite wine from Provence, Clos Milan, from PJ, as I could find it nowhere else at the time. Since then, I've been receiving their newsletter every week or so in my e-mail (not that I've minded). But something was markedly different this time. The text describing the wine had a palpable enthusiasm I'd never seen before. The buyer admitted to a prejudice against Spanish Syrah and said he had tasted it with great skepticism. But he liked it so much that PJ ended up taking the entire vintage, and it is now the only place this wine is available. My shipment arrived a few days ago. Last night I decided to open a bottle. Had I wasted my money? I was expecting to be disappointed.

They say honesty is the best policy. Although I've come to the conclusion in the past couple years that Mark Twain was right when he said that that isn't always true, honesty is called for here. I was a little disappointed. I wanted this to be truly great wine, and it isn't. Having said that, it is a very good wine--a very good wine, indeed. I don't regret buying a case of it. In fact, I recommend you do the same thing.

It was a limpid, strawberry jam red--not the inky purple that Syrah often is. It had a perfume-like nose at first, but the floral scents blew off fairly quickly to reveal cherries and suggestions of tobacco. With a little time in the glass, I began to detect blueberries, bacon, cinnamon, smoke, and even some citrus scents. The blueberry was intriguing because it immediately put me in mind of the Penfold's Grange.

The taste of a wine is difficult to describe at the best of times. Blueberries were again present, but, as the wine opened up, I began to detect strong hints of licorice and citrus. What was perhaps most remarkable was the wonderful balance. This is what wine writers talk about when they say a wine is "elegant." "Poised" is the word that kept coming to my mind. The 2007 Pago Florentino Syrah is excellently balanced between restrained fruit, moderate tannins, and soft acidity. What keeps it from being truly great is that the fruit is a trifle too restrained. The wine is a trifle too light in body. It doesn't have quite the grip I would have liked. Despite very good length, it is not as long as it might be. Yet, these are all relatives. I reiterate: This is a very tasty wine. While I'm fairly certain it won't appeal to palates used to powerfully ripe California-style Syrah, it should appeal to anyone who appreciates a somewhat more restrained European flavor profile. All in all, a very pretty wine that I look forward to sampling repeatedly over the course of the next five to seven years.

Finally, the bottle is extraordinary. The package is irrelevant if the wine is poor, but a nice package is always...nice. The 2007 Pago Florentino Syrah comes in what is the most substantial still wine bottle I've ever encountered. The punt is deep enough to take the entire length of my middle finger. With three inches of wine still in the bottle, a round glass island floats above the level of the liquid (the tip of the punt sticking up inside the bottle). The label, silver embossed on black, is adorned with a pair of deer with grape vines growing from their antlers. All this adds to the pleasure. No, I don't regret buying a case at all.  Highly recommended. $17.99 a bottle, at PJ Wine, New York--which is an excellent price for a wine of this caliber.

[For the record, I have no connections of any kind with PJ Wine except as an occasional customer.]
Posted by Colin Talcroft at 9:01 PM