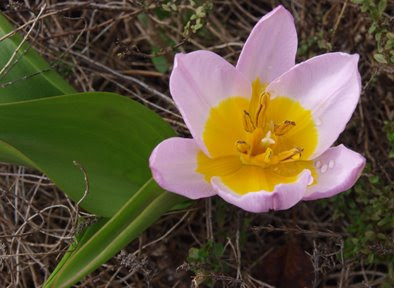 First 2010 blooms today on the rhododendron "Pink Snowflakes" (lower photo) near the bird bath and on the species tulips at the front of the house--Tulipa bakeri. The Rhododendron bloomed on February 22 in 2009. A year according to this plant was therefore 363 days. The bakeri tulips bloomed on March 5 in 2009, so their calculated year was markedly shorter--356 days. I plan to start graphing my data points soon to see what the botanical year looks like. From the data I've collected so far, I can say the plants in my garden seem to think a year lasts about 362 days (the median result). 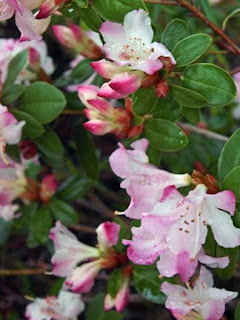 The tulip photo is from last year. This year's flowers are not nearly so fully open. The Rhododendron photo is also from last year. So far, only a single bud has opened on "Pink Snowflakes," but soon the plant will be covered in pink.
Posted by Colin Talcroft at 6:05 PM