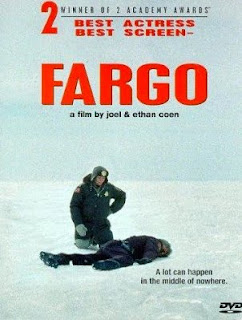 I recently saw Fargo (1996, written and directed by Joel and Ethan Coen) again for the first time in many years. The DVD was on sale for a modest $5, which seemed a bargain, and, having recently cancelled my TV service, movies on DVD have acquired a stronger appeal. I can't remember when I first saw Fargo. I was living in Tokyo when it was released, and I know I didn't see it in a theater there, but I clearly remember the first time I heard about it.

I was driving a rented car. I must have been on a business trip in the US or visiting family, or doing both. I was listening to NPR on the radio--All Things Considered, no doubt. I think I was driving from Dayton, Ohio, to Nashville, to visit the Bridgestone headquarters in the US. At the time, I was a securities analyst covering companies making tire and rubber products.

Someone was interviewing Frances McDormand--an actress I had never heard of at the time. The topic was her new film, Fargo. The interviewer played a clip of the officers investigating the first murders, at the start of the story. I had no images to work with, only sounds, voices (this was radio). The contrast between the horror of the scene (as I imagined it) and the matter-of-fact assessment by McDormand's character, Margy, pregnant Chief of Police in Brainerd, Minnesota, was comical in a black sort of way (as intended), and even more so because of the silly accent the characters use throughout the film.

Seeing it again last week, I was shocked. I should say I was shocked because my 10-year-old son watched it with me, which was not at all appropriate (although he had parental guidance and doesn't seem to have been much affected by the violence). I hadn't intended to show him such a violent film. The experience reminded me of my childhood discomfort watching films at the theater with my parents that I probably shouldn't have been watching. The traumatic big three were Zulu (1964, directed by Cy Endfield, today a favorite film), Bullitt (1968, directed by Peter Yates), and Bonnie and Clyde (1967, directed by Arthur Penn). I don't blame my parents. Film ratings then (and awareness of them) were not what they are today, and my father was (and remains) obsessed with films. We saw most everything released that seemed worthwhile to him, regardless of whether it was appropriate for children. (Having said that, I would have been only four years old when Zulu was new; we must have seen that one at a second-run theater at a somewhat later date.) As my son and I watched, I wondered if Fargo would become my son's Zulu.

Fargo is a very violent film. So, why did I choose to watch it with my son? Because, I realize now, that I had completely forgotten about the violence. It's not that I didn't remember the murders. I had blocked out their graphic depiction. The patrolman shot in the head early in the movie (the first murder) reminded me of one of the most memorable (and horrible) images from the Vietnam War--Saigon Execution (1968), by Eddie Adams. You know the photo: the man shot through the head as he stands in the street. The other murders in Fargo are no less bloody, no less realistically depicted. Only the final gruesomeness--the stubborn leg and foot of the murdered kidnapper sticking out of the wood chipper--is somewhat less horrible, simply because it is so absurd that it's hard not to laugh.

I don't object to the violence. It's integral to the story. The point of this short essay is very simple. It's that the humanity of the main "good" characters, and especially Margy, is profound--so profound that, with time, Fargo can become distilled in memory into an essence that retains only the goodness of the film's strongest characters. What did I remember about Fargo? Mostly the solid uprightness of Margy and her husband in the face of bleakness--both bleakness of the soul and bleakness of landscape (although that landscape is beautifully filmed here). Not blood gushing from the head of a brutally murdered patrolman, but Margy's husband making eggs for her after she's called out in the middle of the night to investigate the first homicides. Not the vast stupidity, vulgarity, and violence of the criminals, but Margy telling her husband to be proud that his painting has been chosen for the design of a new postage stamp, even if it's a stamp of low denomination--"one of the little ones." She reminds him that people need the little ones when the postal service changes rates. His contented smile at the end of the film is one of its quietest moments, but one of its most powerful. The large gap between the way I remembered the film and its actual violence is perhaps a testament to its greatness. Fargo remains one of my favorite films. I wonder how long it will be before I forget the violence again?
Posted by Colin Talcroft at 2:48 PM