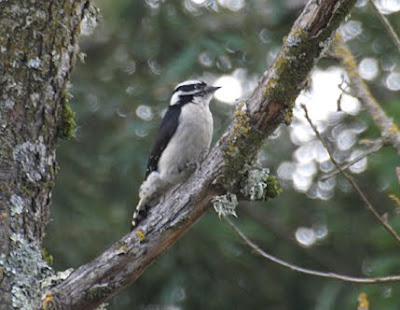 I used a free hour and a half today to take a walk along one of the creeks near my house--about a three-minute drive away--to look for birds on a strip of land there about 50-feet wide on either side of the creek. (Accessible from Arroyo Sierra Dr., between Summerfield Rd. and Hoen Ave., in Santa Rosa.) I saw many birds, including dark-eyed juncos, turkey vultures (14), a belted kingfisher (which was something of a surprise; I've never seen one so close to home before), ruby-crowned kinglets, California towhees, scrub jays, brown creepers (3), yellow-rumped warblers, chestnut-backed chickadees, Nuttall's woodpeckers, robins (10), crows (6), bushtits, house finches, a mallard, an oak titmouse, American and lesser goldfinches, black phoebes, a raptor that went by too quickly to identify (but probably a Cooper's hawk), and, improbably, an Osprey. I've never seen an osprey in suburban Santa Rosa  before.

The bird was soaring at a very high elevation, not anywhere near water, so at first I doubted my eyes, but nothing else made sense. It was an osprey (and the location is only about two miles from Lake Ralphine). Also of interest was a rather oddly colored female downy woodpecker (pictured). I'm almost certain the bird was a downy, but the markings are somehow shifted. There was almost no speckling on the very plain black wings, and the bird did not have the usual white stripe down the back, although I did not get a very good look at it from behind. The photo was hastily snapped, but shows enough to get an idea. Considering the short time I spent, I saw a solid 22 species.
Posted by Colin Talcroft at 10:14 PM