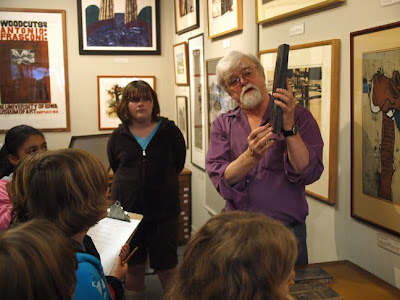 During the past month, I've been teaching printmaking at my son's school, the Santa Rosa Charter School for the Arts. We've talked about etching, done relief printing using styrofoam, done the same using found objects, and we've begun to talk about linocuts, which are essentially the same as woodcuts (the process is much the same, that is).

Today we took a short field trip to The Annex Galleries, at 604 College Ave., in Santa Rosa, one of the best print shops in the north Bay Area; few galleries/shops in the vicinity (if any) have the breadth and depth of what's on offer here. The Annex Galleries specializes in modern prints with an emphasis on prints from around the start of the 20th century until around 1970.

The gallery is now doing a show entitled A Century of American Color Block Prints that is well worth seeing. Many blocks are on display along with the prints, and there is a flipbook that shows the successive stages of printing a multi-block print, which adds an extra dimension (bottom photo). Recommended. Free admission. Street parking only. Monday through Saturday, 12PM to 5PM. Through February 27. 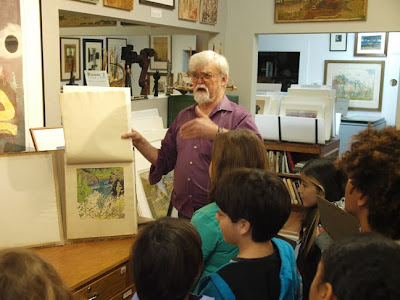